Share All sharing options for: Bruins Ready for Home & Home with Thrashers 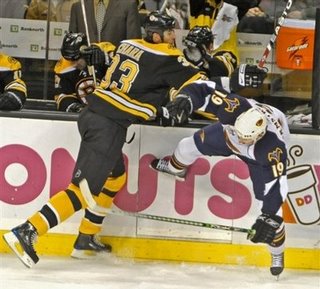 I am happy to report that my power is back on. Now you get to read my uninspired game preview before the puck drops.

The Bruins' tour of the Southeast Division continues this weekend as the B's will try to bounce back from a 3-1 loss to the Washington Capitals on Wednesday with a pair of games against the Atlanta Thrashers.

- Who is the schedule maker that thought a home and home between the Atlanta Thrashers and Boston Bruins was a good idea?

1. They are separated by 1,100 miles
2. They aren't division rivals. A home & home with the Habs or Leafs would be fun, but the Atlanta Thrashers?
3. Is anyone really excited to see the Thrashers play two nights in a row?

- How long can Ilya Kovalchuk stand to stay in Atlanta?

- Aaron Ward will be a game-time decision tonight and could be in the lineup for the first time in 4 games.

- Tim Thomas gets the start in goal tonight.

- The Thrashers called up Mark Stuart's older brother Colin Stuart. If Colin Stuart is in the lineup tonight, it will be his season debut.

- The B's should take advantage of their opportunities with the man advantage. The Thrashers own the league's worst Penalty Kill (73%).

- The B's should apply a lot of offensive pressure and test the Thrasher's goaltender. Atlanta ranks #29 in GAA (3.56).