Share All sharing options for: B's continue their tour of Florida retirement communities 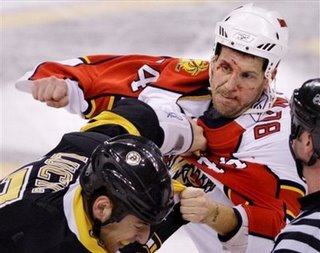 Craig Anderson has been red hot for the Panthers lately. He turned in an impressive 45 save effort Thursday night in a 2-1 victory against Buffalo. Look for Anderson to be back between the pipes again tonight.

Guys Who Like to Drop the Gloves
Nick Boynton: 3 Fighting Majors (fought Lucic on 11/21)

- Kevin Paul Dupont indicated in this morning's Boston Globe that Manny Fernandez would likely get the start in goal. Bish has also reported that Fernandez was the first goalie off the ice during the morning skate, indicating that Manny will likely be the starter tonight.

- Can Craig Anderson really be this good? The B's will need to test him.

- With 3 of their top 4 goal scorers out of the lineup (Booth, Horton, & Stillman), who is left to put the puck in the net for the Panthers?

- I wonder if injured Panthers LW David Booth and Tim Thomas will meet up after the game to shoot the shit about grizzly bear hunting?

- Will Nick Boynton be brave/stupid enough to fight Looch again?


This guy must have joined a Doomsday cult or something because this is the only video for Florida Panthers TV. I feel like this guy would have provided me with enough embarrassing videos for the whole season.