Share All sharing options for: B's follow cranky old snowbirds down to Florida to take on Lightning 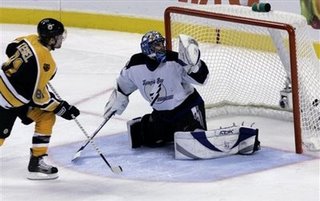 The Bruins hope that they can carry the momentum from last month into December. The B's went 11-1-1 during the month of November. Meanwhile, the Lightning are looking to snap a 5 game losing streak (0-3-2).

Things to Look for Tonight:

- Former Bruins Head Coach Mike Sullivan is back behind an NHL bench as Associate Coach of the Tampa Bay Lightning.

- Will it be Johnny Boychuk or Matt Lashoff that gets the nod as the 6th defenseman tonight?

- The B's should look to control this game early. The Lightning have only a .133 winning percentage when trailing after the first period.

- Tim Thomas and Martin St. Louis were teammates at UVM.

- Tampa Bay is 1-5 in shootouts this season

Nice use of a Bosstones track in the background, though.

UPDATE (3:01 PM): KPD is reporting that Tim Thomas will get the start in goal tonight and Marco Sturm will be out of the lineup once again with the lingering effects of a concussion. If Sturm can't go on Saturday night against the Panthers, the B's would likely call up a forward from Providence. No word on which D-Man will be in the lineup tonight.