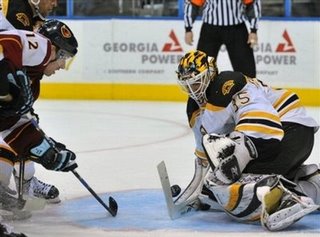 The Bruins were able to edge the Thrashers 2-1 to record their 8th straight victory. Phil Kessel and Michael Ryder (GWG) lit the lamp for the B's, while Bryan Little was the lone goal scorer for Atlanta. Manny Fernandez was tested all night long, but was able to turn aside 32 of the 33 shots he faced.

- Great pass by David Krejci to find Michael Ryder for the game winner.

- Michael Ryder now leads the league with 7 game winning goals. Where are all the Ryder naysayers now?

- There were only 11 combined hits credited during tonight's game. The B's out-hit the Thrashers 9-2.

- The Thrashers new third jerseys look like someone swallowed an Atlanta Hawks jersey and threw it up on a blank hockey jersey.

- The B's PK once again shutdown the opposition's power play. The Thrashers were 0-5 on the power play tonight.