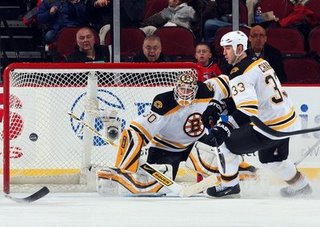 
Tim Thomas made 25 saves to shutout the Devils and help the B's earn their 25th win of the season. Milan Lucic potted what proved to be the game winner at 0:49 of the third period. David Krejci added an empty netter in the final minute to ice the game for the Bruins.

"Tank, that save in the second? Best one of the year."- Shawn Thornton

- Phil Kessel's point streak came to an end at 18 games. It think I may have jinxed him with the Festivus Poll.

- Another good bout by Shawn Thornton vs. Mike Rupp.

- This was the kind of game you expect out of two teams that play with a defense first philosophy.

- After going 7 for 10 on draws Sunday night, Martin St. Pierre was only 17% from the dot last night.

- If you told me that the Bruins would have 25 wins by Christmas, I would have said you were crazy. Believe it!