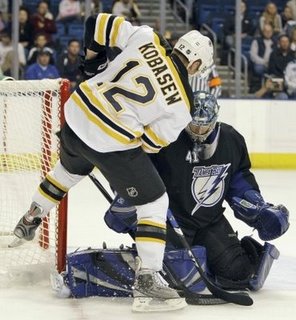 One of the Bruins greatest assets this season has been their depth. Last night's game proved just how deep this team is. With defensemen Aaron Ward and Dennis Wideman out of the lineup and Marco Sturm still sitting out with what we now know to be a neck injury, Johnny Boychuk, Matt Lashoff, and Petteri Nokelainen stepped in to fill in for the injured veterans. Phil Kessel (2) and David Krejci were the goal scorers for the B's. Tim Thomas stopped 30 of 31 shots on goal to earn his 10th victory of the season (10-3-3).

- It looked like it could have been a long night for the B's early in this one. Tim Thomas and the Bruins D got beat badly on the Martin St. Louis goal. Thomas settled in nicely and turned in another stellar performance between the pipes.

- Petteri Nokelainen was a perfect 3 for 3 in the face-off circle.

- 3 of the Bruins last 7 head coaches were in attendance last night at the St. Pete Times Forum. Claude Julien and Mike Sullivan (Tampa Bay Associate Coach) were behind their respective benches, while former B's bench boss Pat Burns was up in the press box scouting for the New Jersey Devils. No word on whether or not Dave Lewis was spotted in the cheap seats.