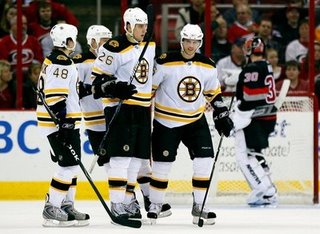 Despite the Carolina Hurricanes controlling play for much of the game, the Bruins found a way to win tonight and extend their win streak to 7 games. Blake Wheeler (2), Michael Ryder (GWG), and Chuck Kobasew (ENG) all found the back of the net for the B's. Tim Thomas turned aside 29 shots in the win.

- How good is Blake Wheeler at creating scoring chances for himself? I knew Wheeler was a great college player with outstanding NHL potential, but I didn't expect him to have this kind of impact right away.

- Blake Wheeler got a late Christmas gift on his second goal of the night. Wheeler was in the right place at the right time with a wide open net and he buried the puck for his 13th goal of the season (leads NHL rookies).

- The B's looked very sloppy at times in their defensive zone tonight.

- Did anyone catch the old lady in the ugly Christmas sweater pointing and yelling in Chara's face during that scrum behind the net?

- The Bruins PK was able to limit Carolina to only 3 power play shots on 4 power play opportunities.