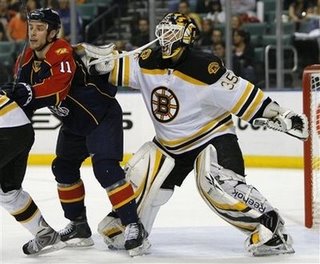 The Bruins shutout the Florida Panthers 4-0 last night to earn their fourth straight victory. Manny Fernandez stopped all 27 shots he faced to pick up his first shutout of the season. With the win, the Bruins improve to 18-4-4.

- Goalie 1A got the job done again. With the win, Manny Fernandez became the first Bruins goaltender since Jon Casey in 1994 to win 7 straight starts.

- "Sherriff" Shane Hnidy found the back of the net for the first time this season.

- David Krejci picked up helpers on 3 of the 4 Boston goals.

- The Boston Globe featured an article about the resurgence of the Boston Bruins on the front page of this morning's paper.