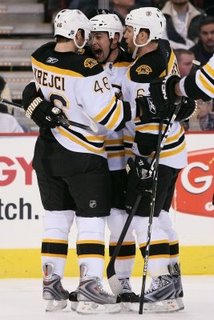 
The Bruins were able to skate past the Penguins 5-2 in Pittsburgh tonight. The win extends their win streak to 9 games, their longest since the '82-'83 season. Zdeno Chara, Marc Savard, Phil Kessel, Martin St. Pierre, and Dennis Wideman all potted goals for the B's tonight, while Petr Sykora and Pascal Dupuis found the back of the net for the Pens. Tim Thomas stopped 32 shots en route to his 16th win of the season (16-3-3).

- Martin St. Pierre looks very odd carrying such a long stick for an undersized forward. St. Pierre is listed as a generous 5'9" and is using a 63" stick. I'm not sure how he even shoots with a stick that long. To put it in prospective, Zdeno Chara (6'9") uses a 65" stick.

- Marc-Andre Fleury saw a lot of rubber tonight. The B's put 40 shots on goal, including 16 shots in the first period.

- Tim Thomas looked sharp all night and made some big stops. Thomas' only major mistake was giving up 2 bad rebounds on the same play which resulted in Petr Sykora's goal.

- Nice awareness by P.J. Axelsson to find Zdeno Chara streaking to the net on the off wing on the power play. Pittsburgh's penalty killers were try to take away the shot from the point, so Chara went to the net and P.J. threaded the needle for the power play marker.

- They say good things happen when you go to the net. That was true on Phil Kessel's goal. Kessel was denied on his first shot, but continued towards the net and Marc Savard found Kessel on the doorstep for his 23rd goal of the season.

- Martin St. Pierre put that long stick to good use tonight as he recorded his first goal as a member of the Boston Bruins. The shorthanded tally was his second career NHL goal.

- Special teams play seems to be a concern for the Pens.

- What a shot by Wideman! Fleury was expecting the heater, Wideman gave him the changeup.

- The B's won the battle in the face off circle 36-26. The Bruins hadn't out drawn their opponent in the previous three games.

- Another good display of slugging ability by Milan Lucic in his scrap with Tim Wallace. Hat tip to Wallace for discarding his visored helmet before the fight and a nice gesture by Lucic to toss his helmet before the fight as well. You see this all the time at the junior level and now at the AHL level that visors are mandatory. How does Lucic get an additional roughing minor out of this? The fight was right off the face off and it appeared as though Wallace was the one who initiated the fight. Maybe it was the gloved slap to the back of the head by Lucic before they dropped the gloves, but I don't see the need to tag him with the extra 2.