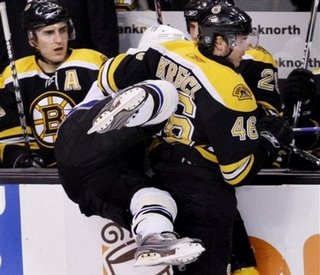 The Tampa Bay Lightning spotted the B's 3 quick goals. That three goal cushion would prove to come in handy as the Bolts battled back to within one goal with 18 seconds remaining in regulation. P.J. Axelsson would ice the game for the B's 8 seconds later with an empty-netter. Milan Lucic, Phil Kessel, Michael Ryder, Zdeno Chara and P.J. Axelsson all found the back of the net for the B's, while Tim Thomas made 26 saves to secure the fifth consecutive win for the Bruins.

- ESPN's John Buccigross visited with Kathryn Tappen and Mike Milbury during NESN's pre-game show. Buccigross described the Lightning as "slow and soft" and mentioned that friend Barry Melrose still seems down about the way things went down in Tampa Bay.

- Textbook 5 on 3 power play goal by Zdeno Chara. The B's worked the puck down low to get the Lightning's triangle PK to collapse which opened up Big Z for a slapper from in between the top of the face off circle and the hash marks.

- Did anyone catch Matt Lashoff's blatant attempt to dislodge the net on Adam Hall's goal in the second period? Nice try, rook.

- Stephane Yelle left the game at the end of the 2nd period after bumping into linesman Mark Shewchyk. Yelle did not return to game.

- The Michael Ryder naysayers have been awfully quiet lately. Aside from KPD's criticism of Ryder's inability to crash the net after shots, I haven't heard much Ryder-bashing lately.

- P.J. Axelsson collected his first goal of the season. OK, so it was an empty-netter, but maybe this will get the monkey off his back.

- I think David Krejci might be my favorite B's broken English interviewee since a young French Canadian kid named Patrice Bergeron first arrived in the Hub of Hockey.