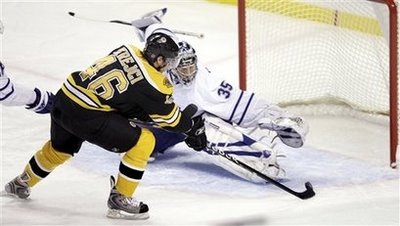 The Bruins outgunned the Maple Leafs in a wild one to extend their home winning streak to 12. This game featured 13 goals, points from 23 players, 9 players with multi-point nights, 3 goaltending changes, and 2 fights...and oh yeah a hat trick. David Krejci found the back of the net 3 times to record his first career NHL hat trick.

- It looks like the B's were able to bring the red hot Vesa Toskala back down to Earth.

- New Leafs GM Brian Burke visited the NESN pregame show. Burke indicated that the Leafs aren't exactly a "Brian Burke team". He mentioned that he prefers his teams to be comprised of bigger, more physical players.

- It was a nice gesture by Jack Edwards, Andy Brickley, and NESN to invite Jimmy Fund patients Caroline Fries and Eric Miller to spend the night in the booth and let them get on the mic as guest announcers. I was glad to see that they didn't take a page out of their mentor's playbook and refrained from lame Finger jokes and obscure literally references. As much as I rip on Edwards, it is obvious that he is a good guy. That had to be a great, unforgettable (and probably nerve-racking) experience for those kids.

- The B's showed that they are willing to stick up for each other once again tonight. If you noticed, the Mark Stuart-John Mitchell fight started when Stuart was trying to back Mitchell off of Stephane Yelle who was already knocked down to the ice in the corner.

- Stephane Yelle was thrown out of the face off circle on several occasions tonight, not something you want to see from your so-called "face off specialist" (especially on the PK).

- "We got a street hockey game going" - Andy Brickley

- If this were baseball, Manny Fernandez would get credit for the save.

- Mikhail Grabovski might have the best hockey hair in the league...and Ryan Hollweg might have the worst facial hair (with the possible exception of Sidney Crosby and Patrick Kane's comical attempts at growing beards).

- Theme of the Night: good things happen when you get to the front of the net. A lot of the B's goals tonight where a direct result of traffic in front.

Next Game: Saturday vs. Carolina 1:00 PM


While NESN chose to use dated rap songs, I have other plans to get you excited for the B's-Canes Saturday matinee. Check back here tomorrow.