Share All sharing options for: B's Game Notes: WAS 3 BOS 1 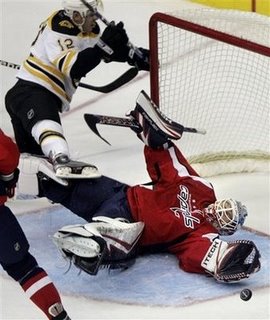 The Washington Capitals snapped the Bruins 5-game win streak tonight as the B's fell to the Caps 3-1 in Washington. Milan Lucic was the lone goal scorer for the B's, who were shutdown by the strong play of Caps goaltender Brent Johnson (33 saves).

- Marc Savard was full of piss and vinegar all night long. He seemed to be chirping at someone in a red sweater after every whistle.

- Did anyone notice Manny Fernandez giving himself what appeared to be smelling salts before the opening face off? I have never seen that before. Is this a common practice for goaltenders in order to stay sharp?

- If Jeremy Jacobs happened to watch tonight's game (which I doubt he did), he was probably very confused to see Milan Jurcina in a Washington Capitals sweater.