B's travel to Jersey in search of win #25

Share All sharing options for: B's travel to Jersey in search of win #25 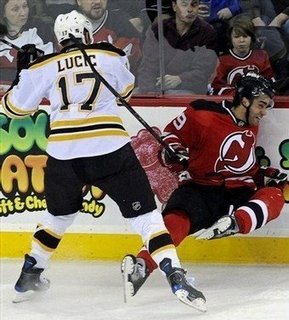 The Bruins will travel to Newark, NJ tonight to take on the New Jersey Devils at the other Prudential Center in a Festivus showdown. The B's are hoping to take home win #25 and extend their win streak to six games. The Devils have also been playing some good hockey lately and will try to keep their own 3 game win streak alive.

- Former BC netminder and former owner of the easiest job in the NHL, Scott Clemmensen has been called upon to step in for the injured Martin Brodeur and he has stepped up huge for the Devils. Clemmensen will likely get the start between the pipes for the Devils tonight.

- The Devils have developed the tagline "Jersey's Team"...well, you know, if you don't count all the Rangers and Flyers fans. I guess "Kevin Smith, Greg Wyshynski, and a couple of guys from Northern Jersey's Team" didn't have the same ring.

- The B's have averaged 5.80 goals for in their past five games. I expect tonight's game to be a little bit of a more low scoring affair. The Devils are 7th in GAA (2.58).

- No word on who will get the start for the B's, but I would expect to see Tim Thomas back in goal after 2 straight starts from Manny Fernandez.

- A Bruins win will give Boston their longest win streak of the season.