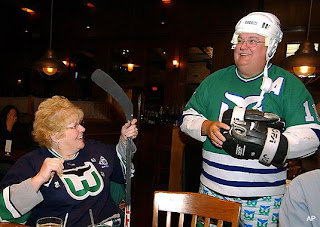 I have been to a few Bruins-Hurricanes games in the past and I am always amazed at how many pathetic losers Hartford hockey historians you see wearing Whalers jerseys and cheering for the Hurricanes. I have never had one of my hometown teams up and leave town (the Pats potential move to St. Louis was the closest), so I don't know how I would react, but I don't think that I would continue to support a franchise that turned their back on their fans.

If you are heading out to the Garden tomorrow, here is a fun game you can play with your friends walking around on the concourse before the game. It is pretty much a scavenger hunt, but I am calling it a whale watch because I am so damn witty and clever. Here is how it works, you get the following points depending on how rare the Whalers jersey you spot is:

3 Points
Any Other Player Jersey

2 Points
Blank Jersey (no name on back)

1 Point
Other Whalers Article of Clothing

I will be going to the game, but I probably won't play the scavenger hunt game, because well it's kind of lame, but it did make for a decent post. I will try to remember to take a few photos of fans wearing Whalers jerseys. If you are heading out to the Garden, snap a few pics of people rocking Whalers gear and send them to stanleycupofchowder@gmail.com with your first name and hometown and I will post your pics on my site and give you the credit. If you do decide to play the whale watch game, send me your high score and I will post that as well.

What would a Whalers post be without a little "Brass Bonanza"?