Bergeron confident he will return this season

Share All sharing options for: Bergeron confident he will return this season 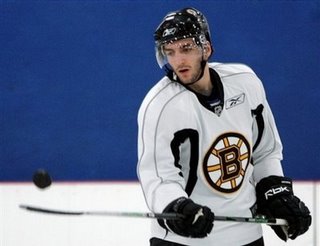 Patrice Bergeron spoke to the media this morning at TD Banknorth Garden and discussed the progress he has made since suffering a concussion on December 20th. Patrice Bergeron said that we has been headache-free and has begun light off-ice training. There is no timetable for Bergeron's return to the ice, but he is confident that he will return this season.

"I'm very confident I'll play this year," said Bergeron. "It's a matter of when. That's why I don't want to put on a date on it and get disappointed like I was last year in the playoffs. I've learned from that. So yes, I do think I'll be back." - quote from boston.com

According to doctors, the concussion that Bergeron suffered during the Carolina game was a result of a blow to the jaw and not connected to last year's concussion.