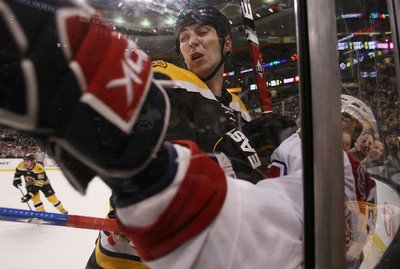 
The Bruins were able to hold off the Canadiens tonight for a 3-1 win. Zdeno Chara scored twice on the power play, while David Krejci added an insurance marker at 18:49 of the third period. Tim Thomas made 34 stops to help preserve the victory for the B's.

- This game featured lots of energy, some big saves, and some sloppy play by both teams.

- Note to Kyle Chipchura: If you are going fight don't wear a visor or take off your helmet.


- Did anyone notice Michael Ryder skated to the wrong penalty box?

- I like what the B's are trying to do on the power play by overloading the right side, getting the puck to the right point, and having Zdeno Chara drive to the net on the back door. They have been doing this a lot lately and it seemed to have paid off tonight (2 PP goals).

- I like how quick Tim Thomas was to stick up for his teammate Aaron Ward after he was run from behind by Andrei Kostitsyn, but that is not his role. Let a skater take care it. Bad penalty by Thomas, fortunately it didn't cost them. That easily could have been called a major penalty, nullifying Andrei Kostitsyn's boarding major.

- Aaron Ward left the game and reportedly re-aggravated the charley horse that kept him out of the lineup last week.