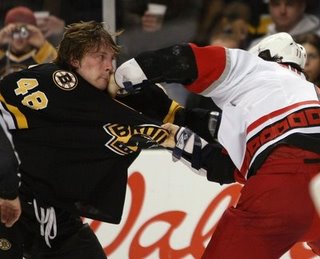 Despite injuries to several key players, the Bruins were able to cruise past the Carolina Hurricanes 5-1 at the Garden this afternoon. The B's jumped out to an early 2-0 lead thanks to first period goals by David Krejci and Stephane Yelle and they never looked back. Michael Ryder (2 goals) and Mark Stuart also lit the lamp for the B's, while Justin Williams was the lone goal scorer for the Canes. Tim Thomas turned aside 29 shots in a solid performance in the Boston goal.

- The kids played well today. Some of the young depth players stepped up big for the Bruins in the absence of some key veterans. Providence call-ups Martins Karsums and Byron Bitz each recorded an assist for their first career NHL points.

- Props to Matt Hunwick for holding his own and then some in his scrap with Justin Williams. Watching the game live, I thought that it looked like a good hard clean hit by Hunwick on Williams. After looking at the tape, it appears that Hunwick did hit Williams up high, but you have to respect the way that Hunwick answered the bell and was accountable for his actions on the ice. What you don't see in this video is Justin Williams jumping Hunwick from behind and putting him in a headlock.

- The Bruins have sent Tuuka Rask back down to Providence. This eliminates any fears that Manny Fernandez may have suffered a serious injury.

- Claude Julien has been named Head Coach of the Eastern Conference All-Star team.

- Marco Sturm is out for the remainder of the season and is expected to undergo knee surgery on Tuesday.

- Byron Bitz, who made his NHL debut today, now has more hits this season (4) than Phil Kessel (2), who has appeared all 42 games this season.

- In 3 games vs. Carolina this season, the Bruins have outscored the Hurricanes 13-5.