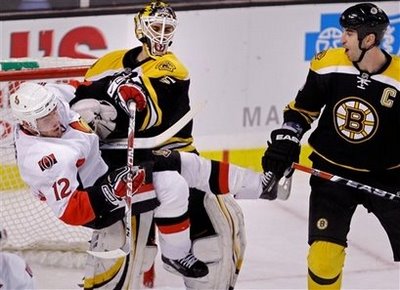 The Bruins were able to snap a 2-game losing streak with a 6-4 victory over the Ottawa Senators on home ice tonight. 6 different players netted goals for the B's (Ward, Kobasew, Ryder, Krejci, Savard, & Axelsson).

- Aaron Ward, clearly fueled by his All-Star snub, found the back of the net for his first of the season.

- Tim Thomas was the first goalie off the ice during the morning skate, but Claude Julien chose to go with Manny Fernandez (26 saves).

- The B's were only able to put 22 shots on goal but they took advantage of the scoring opportunities that they were given and earned a much needed win.

- The Senators had a lot of bad turnovers tonight, including one off the stick of Daniel Alfredsson that according to Senators head coach Craig Hartsburg cost the Sens the game. Hartsburg, sounding like a man fighting to keep his job, placed the blame squarely on Daniel Alfredsson and Jason Spezza: "Those guys cost us the game. You try to trust your best players, and they cost us the game." Rumors are circulating that Craig Hartsburg's days could be numbered behind the Ottawa Senator's bench.

- Another good bout by Shawn Thornton vs. Chris Neil


- The B's are still feeling the absence of Patrice Bergeron in the face off circle. The B's won 40% of the draws tonight. "Face off specialist" Stephane Yelle was 2 for 11 at the dot tonight.

- The B's power play didn't seem to click tonight. They were trying too hard to make that extra pass to find the perfect shot.

- Michael Ryder's goal won me $3 in "pick the next Bruin to score".

- Patrice Bergeron will hold a press conference at 11:30 AM tomorrow to speak to the media about the concussion he suffered during a game against the Carolina Hurricanes on December 20th.

- The B's will practice at TD Banknorth Garden tomorrow morning instead of Wilmington, most likely to coincide with Bergeron's press conference.