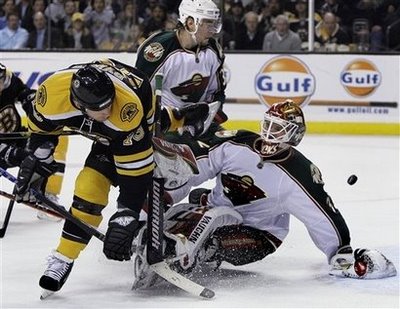 The Bruins did something tonight that they haven't done all season: they lost back-to-back games in regulation. The B's were baffled all not all night long by Nicklas Backstrom and the Minnesota Wild. Backstrom turned aside 28 shots en route to his 5th shutout of the season. At the other end of the ice, Manny Fernandez made 23 stops but was beaten by Marek Zidlicky for the game's lone goal.

- Shane Hnidy is definitely a hockey player. Hnidy took a puck to the face (looked like his eye), went to the dressing room, threw on a visor, and was back on the bench about 10 minutes later.

- I like what Milan Lucic was trying to do to mix things up with Owen Nolan in the third period to try and give his team a boost.

- Wow, I have not seen a "spin-o-rama" move like the one Marc Savard pulled off since NHL 95.

- The most ill thought-out promotional campaign in history: Versus' "Show Me Your V" campaign. They just left themselves self wide up for ridicule on this one. Nobody thought this was a bad idea? C'mon Versus, everyone knows that you have to at least offer a cheap "Girls Gone Wild" t-shirt if you want to see some V. You have to respect their straight forward approach though. I guess "We got bass fishing and bull riding" isn't that smooth of a line.

- Cal Clutterbuck is one of my favorite names in hockey, along with Bear Trapp and Wacey Rabbit.

- The B's will look to get back on track on Thursday when they play host to the struggling Ottawa Senators.