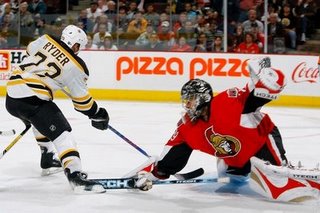 The Bruins will look to end their New Year's hangover (1-2-0 in '09) and return to their winning ways tonight when they host the struggling Ottawa Senators at the TD Banknorth Garden. Ottawa is finishing up an 8-game road trip that has seen the Sens go 1-5-1 during that stretch.

- Senators LW Jarkko Ruutu is serving a two-game suspension for biting the hand of Andrew Peters of the Buffalo Sabres during an altercation. He will not be in the lineup tonight.

- Tim Thomas left the ice first this morning, which means he will likely be the starter tonight.

- Yesterday, the Senators called up D Matt Carkner from Binghamton. The Sens might be looking for some grit in their lineup with the suspension of Jarkko Ruutu. Carkner has 70 PIMs in 24 games for the B-Sens this season. The 6'4" 229 lb defenseman has 6 fighting majors in the AHL this season, including 2 bouts against minor league fighting legend Jon "Nasty" Mirasty. Although normally a defenseman, Carkner will likely see time as a winger on the 4th line.

- The B's should look to get a lot of pucks to the net. The Senators have the league's worst winning percentage when they are outshot (.105).

- The B's #1 priority should be shutting down the Sens first line (Spezza, Heatley, Alfredsson). Beside the top line, no one on Ottawa's roster has more than 6 goals.

- I will be at the Garden tonight for the game. This will be my 3rd game of the season (Panthers & Hurricanes were the others).

- For more on the Sens from north of the border, check out Five For Smiting or Sens Army