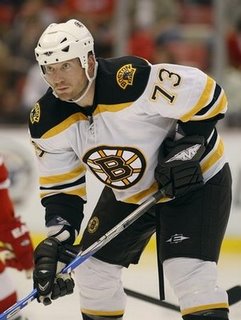 Maybe it was the pressure that goes along with signing a big free agent contract, maybe it was adjusting to a new team and a new city, or maybe it was just bad bounces. For whatever reason, Michael Ryder just wasn't finding the back of the net early in the season. When Ryder's old team, the Montreal Canadiens stroll into the TD Banknorth Garden tomorrow night they are going to see the old Michael Ryder: the sniper with the quick release and a knack for burying the puck.

The last time Ryder faced his old 'mates was back on November 22nd. At the time, Ryder had netted only 3 goals in his first 20 games in Black & Gold. Ryder had been playing solid in all three zones, but couldn't seem to light the lamp as advertised during the early part of the season. Montreal held Ryder pointless that night, but sometime shortly after the Habs game something clicked for Ryder. He went on a tear, scoring 14 goals in 20 games, including 5 game winning goals.

Ryder's 17 goals place him second on the team behind Phil Kessel (24 goals). The winger has proven that he can come through in the clutch with a league-best 7 game winning goals. Early in the year, many B's fans and media members were ready to ride this guy out of town on a rail, but I haven't heard much from those people lately.