B's hoping for leisurely trip to the Island

Share All sharing options for: B's hoping for leisurely trip to the Island 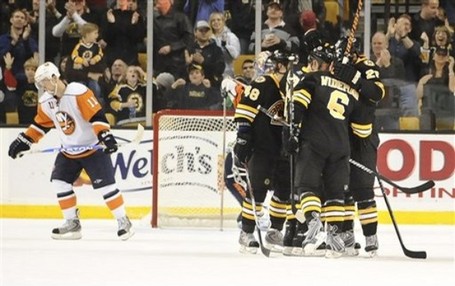 On paper this game looks like a game featuring teams that are polar opposites. One team sits atop the Eastern Conference, while the other is in last place in the conference and 40 points out of first. One team has benefitted from strong goaltending from both their netminders, while the other has had to deal with injuries to both their goalies. The Bruins enter tonight's game riding a three game win streak, while the Islanders will look to snap a five game skid and earn their first win of '09.

Goaltending
The Islanders have seen their top two goaltenders go down with injuries recently. Joey MacDonald suffered a strained groin earlier this week, while Rick DiPietro has had another setback while trying to recover from a knee injury that has hampered the former BU netminder all season. Rumors from Long Island indicate that Ricky D could be on the shelf for the remainder of the season. The Isles will have to rely on Yann Danis and Peter Mannino between the pipes tonight with Danis being the likely starter for the Islanders.

- Aaron Ward is not traveling with the team and will miss tonight's game and the Capitals game on Saturday. Ward was on Toucher & Rich on WBCN yesterday morning and alluded to the "charley horse" in reality being a re-aggravation of the ankle injury he has been dealing with all season.

- Tim Thomas will likely get the start with Manny Fernandez back on the B's bench working the door after missing the past couple games with what is now being reported as back spasms.

- The Islanders announced today that they will play a preseason game in Kansas City next year, sparking rumors of possible relocation.

- Recent Isles call up Peter Mannino's only NHL action came back on November 28th against the Bruins. Mannino let up 3 goals on 8 shots in 13 minutes of work in the Islander's net.

- The B's can not take the Islanders lightly. This is the type of game that desperate teams get amped up for.

- For more on the Islanders and advice on how to survive a bear attack, check out Lighthouse Hockey

If you are a regular Stanley Cup of Chowder reader you know that this is normally where I post an embarrassing video of one of the opposing team's fans. I decided to forego posting a video today, because really haven't the Islanders fans suffered enough this year?