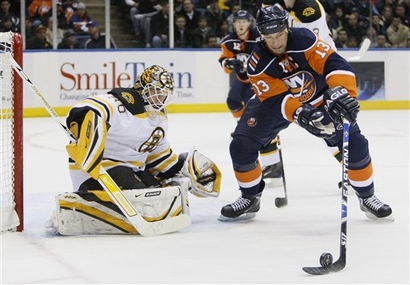 The Bruins didn't play their best game but they were able to get off the island with a win. The Islanders came out with a lot of energy and they tested Tim Thomas all night long. Luckily, Thomas was up to the task tonight (40 saves). Thomas was just 53.2 seconds away from recording his 4th shutout of the year, but Billy Guerin and a deflection off a skate blade put an end to any thoughts of a shutout. Marc Savard and Martin St. Pierre were the goal scorers for the B's.

- The Islanders were very aggressive on the forecheck tonight.

- This was a statement game for the Islanders and they came out with a lot of energy. The Islanders completely controlled play in the first period. In the first, the B's were out-shot 17-7, out-hit 11-7, and out-drawn in the face off circle 10-6.

- Tim Thomas faced 41 shots tonight, but it easily could have been a lot more. The B's blocked 23 shots tonight.

- The Thornton-Jackman fight was not nearly as exciting as Jack Edwards made it out to be. It did seem to take some of the wind out of the Islanders sails though. I saw Jackman losing his balance and Thornton wrestling him to the ice. I must have missed the "one punch knockout!".

- Marc Savard looked like he was skating by himself on the pond on his goal.

- There were a lot of funny bounces off the endboards tonight. Martin St. Pierre took full advantage of those funny hops when he deposited a Vladimir Sobotka rebound into the back of the net.

- One of the most shocking things about tonight's game was that the Wheeler -Krejci - Ryder line didn't score.

- Hopefully Milan Lucic will be healthy and back in the lineup soon. The B's seemed to be missing that energy that Looch provides.

- The B's will need to play a much better game if they want to beat Alex Ovechkin and the Washington Capitals on Saturday.