Murphy's Law: If it ain't broken, don't fix it

Share All sharing options for: Murphy's Law: If it ain't broken, don't fix it 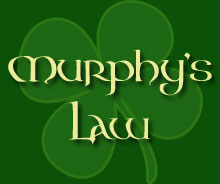 Ed. Note: Hockey writer and broadcaster James Murphy has graciously agreed to help me out here at Stanley Cup of Chowder and will occasionally provide content to the site. This piece originally appeared on NESN.com.

Murphy's Law: If it ain't broken, don't fix it

The NHL trade deadline is over a month away but you wouldn’t know it from the last week as rumors ran rampant that the Tampa Bay Lightning are shopping their captain Vinny Lecavalier. Of course, as they do every season, the Montreal media decided that there could be only one suitor and one destination for Lecavalier and that would be to come home to his native Montreal and play for the Canadiens. But unlike those past fantasies of the Francophone media and fans, these rumors are legit and have plenty of substance. Despite Tampa Bay GM Brian Lawton denying that they aren’t shopping one of the best players in the game, Lecavalier is very much available to the highest bidder.

But while the Habs are definitely one of the highest bidders, along with the Los Angeles Kings, the Boston Bruins are not. So please do not believe the mainstream media and rumor mongers who decided to run with a well-respected writer’s advice in a recent column and claim that the team with probably the deepest core of youth and talent right now, is suddenly going to just blow that up for a new “face of the franchise.”

In Wednesday’s Boston Globe, Hall of Fame hockey scribe Kevin Paul Dupont suggested the Bruins should use their wealth of young, inexpensive talent and depth to acquire Lecavalier.

“The Bruins could part with two first-round picks, or part with one first-rounder and offer a choice of former top picks Zach Hamill (No. 7 overall, 2007) or Joe Colborne (16th, 2008). The Bruins would not offer Kessel and Krejci, but could be enticed to give up one or the other. Lawton, a former agent, most likely would grab Krejci, one of his former clients. One of Boston's other two prime young forwards, Wheeler and Lucic, then would be on Tampa's wish list.”

Dupont then went on to suggest the Bruins might have to offer defenseman and possibly Norris Trophy candidate Dennis Wideman to seal the deal. Unfortunately, fans and media a like went on to take this as what the Bruins had or may have been offering for Lecavalier, but that’s just not the case. While that would be exactly what Lawton or any GM in his situation would want and what Lecavalier is probably worth, that is not what the Bruins want to offer or would even consider offering.

Of course any good GM will look into acquiring a superstar on the block, and sources tell Murphy’s Law the Bruins have investigated what it would take. But the reason Peter Chiarelli is a good GM with his team in contention for the league’s best record is because he thinks in the present and for the future. The Bruins are not only a contender for the Stanley Cup this season but probably for the next few years and that is because Chiarelli has nurtured and built a core of young talent mixed with key veterans. The success this team has had in spite of an onslaught of injuries to key players such as Patrice Bergeron, Marco Sturm, and Kessel, shows just how deep that core is. So why mess with that depth and the chemistry this team has?

Sure Lecavalier is a Stanley Cup winner and combines skill, size and grit, but why put all your money in one such player when you can have multiple players that display the same attributes? Yes, individually they don’t yet approach the level of Lecavalier, but combined these players are capable of achieving what Lecavalier did with his teammates in 2004 and much more than what he has not done without many of them since. The Bruins have their fans back, they mean something in Boston and are looked at as a model franchise once again in the hockey world. Unless they can fleece the Lightning (based on some the moves that team has made over the last seven months, that could be possible), they should shift their focus to adding to what they have, not trading it away.

So before Bruins fans and the Boston media decide to get carried away in the idea of bringing in a superstar, realize you already have some in Marc Savard and Zdeno Chara and a few more in the making in Kessel, Krejci and Wideman. Let Chiarelli bring in some help for the stretch run and playoffs and with this core the Bruins have the chance to end one of the longest championship droughts in sports and the longest in Boston.

Think back to what happened with the Red Sox in 2004 when they lost out on Alex Rodriguez. That worked out pretty well eh?

James Murphy has covered the Bruins and the NHL for the last seven seasons. He has written for the Hockey News and in addition to NESN.com he currently writes for NHL.com, Insidehockey.com, and the Boston Metro Web site, www.metrobostonnews.com. Murphy also hosts the "Inside Hockey Radio Show" every Saturday from 2-4 p.m. ET on "NHL Home Ice" XM 204 and Sirius 208, WBNW AM 1120 in Boston (Youcastr.com) and the Team 990 in Montreal (www.team990.com).