Share All sharing options for: B's Game Notes: WAS 2 BOS 1 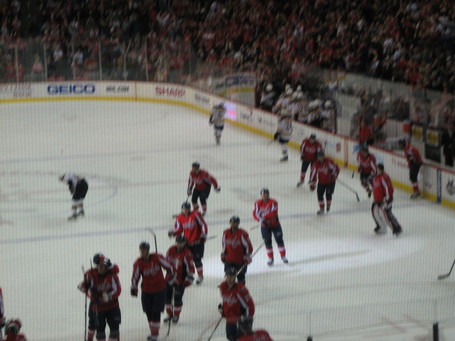 The Washington Capitals got the better of a banged up Bruins squad tonight. Marc Savard put the B's up 1-0 with a power play goal early in the second period. Mike Green would strike back 1:10 later with a power play goal of his own to even things up at 1-1. Alexander Semin scored the eventual game winner at 11:48 of the third period with a laser from just inside the blue line that beat Tim Thomas on the glove side. The Bruins had an opportunity late in the third period when John Erskine was whistled for elbowing at 18:19, but the B's failed to muster a legitimate scoring chance with the man advantage and the goalie pulled. Both goaltenders looked sharp tonight. Jose Theodore stopped 23 shots, while Tim Thomas turned aside 28 shots in the loss.

- This game had a playoff feel to it. It had lots of energy and plenty of physical play.

- I was glad to see Dennis Wideman was able to return to the game after taking a hard hit from Alex Ovechkin. The last thing the B's need is another injury to a defenseman. Looking at the replay of that play, it looked like a clean hit from the camera angle that was shot behind Ovechkin.

- The Caps always seem to get under Marc Savard's skin.

- On Mike Green's goal: Matt Hunwick and P.J. Axelsson need to be aware of where he is and see him driving to the net.

- The Capitals were leaving Ovechkin out for very long shifts. He averaged 1:10 per shift tonight.

- The time honored Washington/Baltimore tradition of defiling the National Anthem continues. It was been a long standing practice for Orioles fans to yell "O" when "O" is sung during the anthem. This tradition has spread to all area sporting events including Caps games. Well, Caps fans have taken it a step further and yell "RED!" during the Star Spangled Banner, I guess because the Capitals wear red.

- U.S. Senator and alleged B's fan John Kerry was at the Verizon Center for the game and was booed by Caps fans when he appeared on the jumbotron. I bet he thinks that "Manny Ortez" is the backup goalie for the B's.

- Alex Ovechkin had 9 shots on goal tonight. He now has a league-leading 291 shots on goal in 44 games. Jeff Carter is second in the NHL with 198 shots.