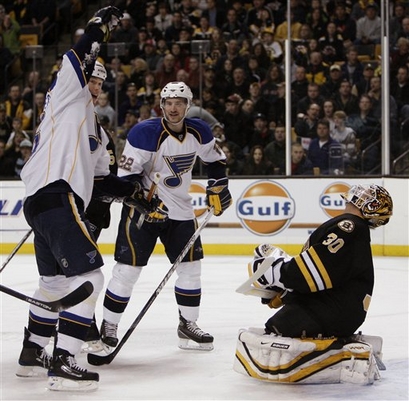 The Bruins fell to the visiting St. Louis Blues in a wild one this afternoon at the TD Banknorth Garden. If you happened to turn this one on with about 6 minutes left in the third period, you didn't miss much.

At this point, the B's trailed 2-1 and were coasting their way through a lackluster third period where they hadn't even registered a shot on goal in the period. At 14:55 of the third, the Blues' David Backes was sent off for hooking, giving the B's a 5 on 3 power play. On the 2-man advantage, the B's worked the puck around and found Michael Ryder in the slot to tie things up at 2-2. P.J. Axelsson would strike 19 seconds later for the go ahead goal. Zdeno Chara then added what appeared to be an insurance marker with a wrister from the point at 16:55 of the third period. However, the Blues came roaring back with a power play goal from David Perron with 1:20 left in regulation to make it 4-3. With less than a second left on the game clock, David Backes knocked the puck out of the air and batted it into the Boston goal. After several minutes of video review to determine if the puck was played with a high stick, the ruling on the ice was upheld and the goal was allowed.

After a scoreless overtime session, the teams headed to the shootout. With the Blues up 1-0, Brad Boyes skated to center ice with the chance to seal the victory against his former team. Boyes slide the puck past Tim Thomas, beating him five-hole for the game winner.

- It appeared as though the puck was played with a high stick on Backes' game-tying goal, but it was definitely close. Since it was called a goal on the ice, conclusive evidence was needed to overturn the call and I'm not sure you could call that evidence conclusive, especially with the camera angles that were available.

- The Bruins are now 2-5 in shootouts this year. They have only 5 shootout goals on 25 attempts.

- One thing I have noticed over the past couple games is that the Bruins defensemen do not respond well to an aggressive forecheck. If the B's are shopping at the trade deadline, I think the one thing that they need is a puck-moving defenseman. They will probably have a hard time finding one though, defensemen (especially ones that can move the puck) are at a premium right now.

- I'm not sure why Dan Hinote jumped in on Chara and Crombeen's shoving match. I'm pretty sure Crombeen is a big boy who can handle himself. Didn't he take a pounding from Milan Lucic earlier this year and stay on his skates?

- The Bruins did not record a shot on goal in the third period until 15:16 into the period.

- Thanks to the folks over at St. Louis Game Time for letting me crash their open thread. My readers haven't really figured out this whole open thread thing...either that or they have jobs and social lifes.