Straight from the Zebra's Mouth 1/20

Share All sharing options for: Straight from the Zebra's Mouth 1/20 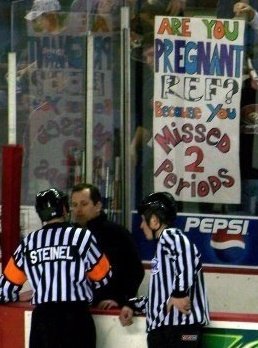 You may remember that I did an interview with Tom before the season started. Tom was nice enough to answer some more of my questions and even offered some perspective on yesterday's controversial goal in the B's-Blues game.

How is the season going so far?

So far so good. I had a strong first half and hope to continue that into the second half.

I was glad to see the CHL strike ended pretty quickly. What would you have done if there was an extended work stoppage? Would you be allowed to work games in another league?

If the work stoppage had continued into the start of the regular season the officiating staff would not have been working, however we would still have been paid our salary as our contract states. But we were all happy to get the season started on time.

This is your first full season in professional hockey, what has been the biggest adjustment from working games at the junior level?

There haven't been any real big adjustments. The game remains the same. The speed is a bit  quicker  and obviously the players are bigger and stronger .

Is there any sort of good-natured hazing that goes along with being a rookie official?

There is always a "welcoming" for the new guys on staff wherever you go. The last night of training camp this year we had a social party and the veterans had a little fun with us new guys (all in good taste and nothing that ever crossed the line). It was a good time for all involved.

Everyone has their own game day routine but for the most part they are all pretty similar. I personally like to get up a bit early and have breakfast run a few errands or get a light workout in. Most of the time all the guys that are working that game are already in the the city so a big pregame meal together is next. Usually it's just catching up with each other's games, travel, and what is going on around the league. After lunch if there is no travel to the arena its either back to the hotel or the apartment to lay down for a bit and try to catch a nap. If we have to travel to the arena it's on the road usually around 2 in the afternoon depending on distance to the city we are working in. We are required to be at the arena 1 1/2 hours prior to game time and then its time to go to work.

Besides knowing the rulebook, on-ice officials need to be tremendous skaters. What kind of training do you do to stay in shape and work on your skating?

Everyone has their own training methods and programs and it takes some time to find what works for you. For me the off season begins with weight training, I focus on heavier lifting exercises to increase size and body weight because as the off season moves along my workouts change. The closer I get to training camp I switch my workouts to a bit more circiut training and more "skating" orientated exercises. I do a lot of core training with an exercise ball during my workouts as well as variations of traditional exercises to increase the difficulty and work the core and stabilizer muscles more such as standing on one foot or sitting off of the seat. In addition, cardiovascular workouts are extremely important to our job. Jogging, biking or even the stair master are great ways to get your heart rate up. I wear a heart rate monitor during these workouts so I can track my progress.

This past summer you attended the NHL prospects camp. What was that experience like?

Prospects Camp was a great experience and a great honor. I was the first official from the Atlantic District of USA Hockey to be invited. I was fortunate to attend with some close friends from the USHL. To be able to have the NHL at your finger tips for an entire week is an opportunity not available to a lot of people and I am certainly grateful for the opportunity. It was a lot of fun.

The CHL is known to have some pretty crazy promotions (This is the league that tired to put Manute Bol on skates). What is the craziest promotion you have seen this year?

I haven't seen many promotions because the big ones are taking place during the intermissions, when that is our only chance to rest. I was in Laredo on New Years Eve where they had a great fireworks display for the fans following the game. Many teams also have special nights where they will wear specially made jerseys to be auctioned off after the game such as Military Appreciation nights or holidays. Odessa wore such jerseys for their home opener this year on Halloween, and most teams around the league do othe same for Christmas and New Year.

Do you find it ironic that the player who has the second most PIMs in the CHL is named Angel?

I suppose it is now that I think about it. Brett is big strong physical player and a nice guy. My dealings with Brett have been good. He's very easy to talk to and get along with. Obviously with his size at 6-7, I think, makes him an intimidating player.

What is the weirdest on-ice conversation you have ever heard (that you can talk about here)?

The weirdest on-ice conversation? I'm not really sure, most conversations are pretty standard but I like to have fun and joke around so making comments about a guy losing three ceremonial face offs before the game started was one that got a good chuckle, and a kiss cam comment always gets a laugh.

Most CHL teams play in warmer climates. Have you found that the ice conditions in CHL arenas are worse than in other leagues that you have worked in?

Yes, I have noticed that some cities on their warmer days, if not planned for early on in the day, do tend to cause some ice problems. However, for the most part the crews that work in these cities are use to running into these types of problems and plan accordingly.

The CHL has gone to 1 minute minor penalties during overtime. From what you have seen, has this changed the way teams approach overtime? What was the rationale behind the move to 1 minute penalties?

I havent seen any significant changes to how teams approach overtime. It's still the same format as far as number of players on the ice as in years past. The reasoning behind this change was that a 2 minute minor penalty takes away almost half of a 5 minute overtime period. Right now the CHL & AHL are experimenting with this procedure.

A lot has been made about dangerous hits to the head in the NHL this season. Do you think that the NHL and other pro leagues will institute new rules regarding contact to the head like the NCAA has done?

If this becomes a serious issue, I would think the leagues would respond accordingly. The safety of the players is of upmost importance. No one wants to see anyone seriously hurt. However, in saying that, hockey is a very fast, very physical game and injuries are inevitable. But when injuries are caused by dangerous illegal hits to the head this is a cause for major concern.

There is a little controversy surrounding the Blues' game-tying goal against the Bruins in the last seconds of yesterday's game. Some people seem to be a little confused as to why the Blues goal in the last seconds of regulation was allowed. What is your interpretation of the rule regarding playing the puck with a high stick on a play that results in a goal? Also, It seemed as though the NHL war room did not have the proper camera angles to find conclusive evidence to overturn the call. Do you think that it would be possible or beneficial for the NHL to set up cameras in each rink that it designed specifically to determine the height of a stick in relation to the crossbar?

The rule regarding a high stick on a goal is that if the puck makes contact with a stick above the height of the crossbar the goal shall be disallowed. The key point to make here is the puck's contact with the stick is what matters and that point of contact must be above the crossbar. The NHL war room from my understanding may not receive both feeds from both cities' networks due to their specific satellite companies that issue them their feeds. So they may not have the same camera angles viewers in Boston may have if they are only receiving the angle from the St. Louis network (Ed. Note: There was no local TV broadcast of yesterday's game in St. Louis). In addition some views to the war room may be in HD, some may not even though they are locally in HD again due to the satellite and network reason I just pointed out. Setting up cameras in each arena would most definitely be beneficial. Possible, I don't know. In the past the NHL has done a very good job in setting up equipment or amending rules to rectify major issues they have come across, so I'm confident if the NHL feels a change needs to be made they will do so.

Thanks for taking the time answer my questions. Good luck with the rest of the season.