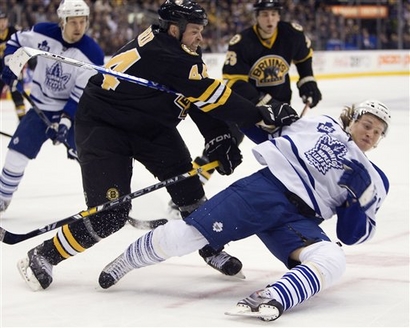 The Bruins were able to take advantage of power play opportunities to mount a third period comeback en route to a shootout win. After trailing 3-1 entering the third period, the B's got power play goals from Dennis Wideman and Zdeno Chara to knot things up at 3-3 and send the game to overtime. After a scoreless overtime session, the teams headed to the shootout.

With the Bruins trailing 2-1 in the shootout, Claude Julien looked to Providence call-up Matin St. Pierre to extend the shootout. St. Pierre showed the composure of a veteran by beating Vesa Toskala and keeping the B's chances alive. After Tim Thomas stoned Nikolai Kulemin, it was all up to Michael Ryder to clinch the game for the Bruins. Ryder skated in and fired a wrist shot, beating Toskala top shelf for the game winner.

- Enough with the third jerseys. If you wear them all the time, they are no longer special.

- Byron Bitz had a great opportunity to score his first NHL goal, but was robbed by Vesa Toskala.

- That backdoor move on the power play is become Chara's MO.

- Blake Wheeler used the same shootout move as he did on Monday, this time with better results.

- Entering tonight's game, Michael Ryder was 1 for 11 on shootout attempts.

- I don't think that anyone predicted that the Bruins would be 34-8-5 at the All-Star break.

Next Game: Tues vs. Washington