Share All sharing options for: Strong Showing for B's in Skills Competition 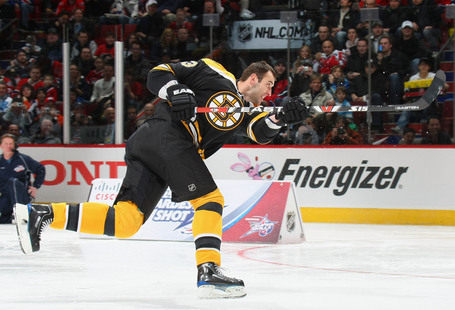 The Boston Bruins were well represented tonight at the NHL SuperSkills Competition in Montreal.

Rookie Blake Wheeler would be the first member of the Bruins to take home hardware when he was named MVP of the YoungStars Game. Wheeler recorded a hat trick while leading the Rookie team to a 9-5 win over the Sophomores. 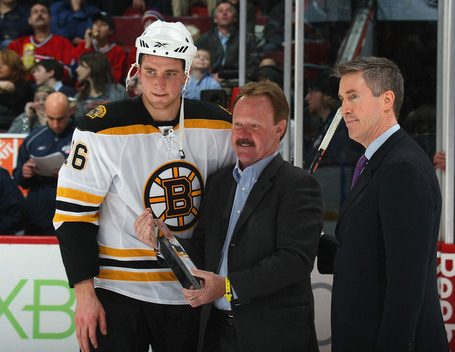 Not wanting to be outdone by his rookie teammate, Zdeno Chara reached back for a little extra on his second attempt in the Hardest Shot competition. Chara's blast lit up the radar gun at 105.4 MPH, breaking Al Iafrate's previous NHL Skills Competition record of 105.2 MPH. Besides being the the new Hardest Shot record holder, Chara was also able to raise $24,000 for Right to Play as part of a wager involving the Hardest Shot competitors with contributions from the competitors, the league, the players' teams, and the NHLPA.

Marc Savard failed to win the Accuracy Shooting event (3 for 8), but Savvy had a strong showing (...and maybe a little help from teammate Tim Thomas) in the Elimination Shootout Challenge. Savard, who also provided commentary throughout the night for Versus, finished second in the event behind Shane Doan of the Phoenix Coyotes.