Share All sharing options for: Caps come to Causeway 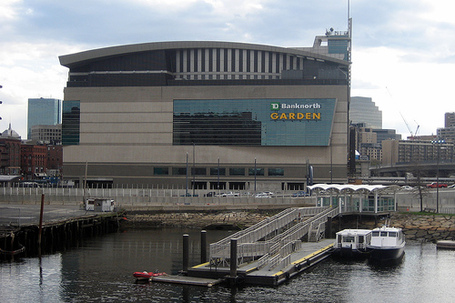 The Bruins have not been able to beat the Washington Capitals this season in two previous meetings between the two teams. Of course, both of those games took place at the Verizon Center, where the Capitals have been virtually unbeatable this season (19-3-1). Much like the screaming kid that kicks the back of your seat for an entire 3 hour flight, the Capitals are not very good travelers. The Caps are just 11-12-2 away from the "Phone Booth" this season. The Capitals will also see a very different team tonight than the one they saw a week and a half ago. The Bruins will welcome back Patrice Bergeron (concussion), Milan Lucic (shoulder), and Andrew Ference (broken tibia), who are all expected to be in the lineup tonight against the Capitals.

- Michael Ryder sat out the morning skate with flu-like symptoms. He is questionable for tonight's game.

- Patrice Bergeron will likely take Ryder's spot as the right wing on the line with Krejci and Wheeler. I'm not sure I understand the logic of playing Bergeron on the wing. The Bruins play a possession game and that all starts in the face off circle. Bergy is the Bruins best face off guy. Why take away one of the best aspects of his game? He is going to get hit no matter where you put him on the ice.

- With no extra forwards left up with the big club, the Bruins will likely dress Matt Hunwick as the 7th defenseman and maybe give him some time as a forward on the fourth line.

- Tim Thomas will get the start in goal tonight. Tuuka Rask will work the door as the backup tonight, while Manny Fernandez gets a few days rest.

- Here are the projected lines for tonight according to Fluto Shinzawa of the Boston Globe:

- Hopefully with Milan Lucic back in the lineup, the Bruins will get back that extra energy that they have been missing over the past couple games.

- The All-Star break was timed perfectly for the B's. They were able to get their injured players a few more days of recovery in order to get them back in the line up for a stretch of games against the best teams in the Eastern Conference.

- Congratulations to Capitals Head Coach Bruce Boudreau for being inducted into the AHL Hall of Fame last night as part of AHL All-Star Weekend in Worcester.

- To see what the fat cats down in Washington are saying about tonight's game, check out Japers' Rink

Public Skate starts at 6:00 PM ET:Watch the game and join the open thread to discuss the game with other B's fans.