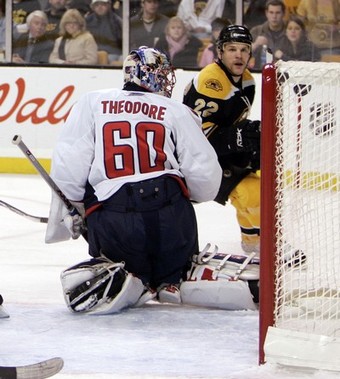 The Bruins managed to defeat the Washington Capitals thanks to some strong goaltending from Tim Thomas (34 saves) and a little puck luck in overtime.

Mike Green put the Capitals on the board early in the first period with a wrister from the point. Shawn Thornton got the B's even at 1-1 with a great individual effort to intercept a clearing pass and beat Jose Theodore with a backhander for his 4th goal of the season. Michael Nylander sent the Caps to the dressing room up 2-1 after the first period with a goal with 21 seconds left in the period. The Bruins evened things up at 2-2 at 14:12 of the second period with a power play goal by Marc Savard set up by a great diving play by Patrice Bergeron, who kept the puck in the zone and slid a pass over to Savard, who found the back of the net for his 17th of the season .

After a scoreless third period, the game headed to overtime. Tim Thomas kept the Bruins hopes alive in overtime with a spectacular save. After Thomas left a juicy rebound in front off Alex Ovechkin's shot, Niklas Backstrom had virtually an open net to shoot at, however the B's All-Star netminder was able to make his way across the crease to rob Backstrom with a right pad save. A hooking call on Niklas Backstrom put the B's on the power play at :48 of the overtime session. The Capital's Jose Theodore put on a goaltending clinic of his own when he flashed the glove to stop David Krejci's power play bid. Shortly after being robbed by Theodore, Krejci appeared to try to make a pass over to Marc Savard, who was set up beside the Capitals goal. The puck deflected off Capitals defenseman Shaone Morrison's leg and trickled past Jose Theodore for the game winner.

- I love when Shawn Thornton is rewarded with a goal. Thornton plays hard every shift and is clearly much more than just an enforcer.

- There was a very scary moment in this game when Alex Ovechkin went head first into the boards. Ovechkin was hooked by Zdeno Chara and lost an edge which caused him to go crashing awkwardly into the boards. Ovechkin stayed sprawled on the ice for a few moments before getting to his feet and making it off the ice under his own power. Ovechkin went to the dressing room with about 5 minutes left in the second period, but was able to return to action for the start of the third period.

- Hat tip to Byron Bitz for dropping the gloves with one of the NHL's toughest customers.

- Patrice Bergeron, Milan Lucic, and Andrew Ference all returned to the line up tonight.

Andrew Ference: 18:43 TOI, -1
Andrew Ference looked a little rusty at times tonight but that is to be expected when you have missed as much time as Ference has. He had at least one bad turnover in the defensive zone and over-committed on a play while trying to keep the offensive zone in the second period. Ference took some hard hits tonight, which didn't seem to slow him down, which is a good sign that his leg has fully healed.