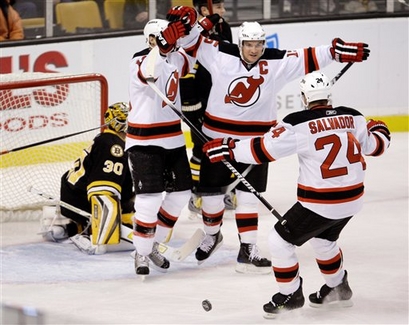 After trailing 2-0 in the third period, the Bruins scored three unanswered goals in the third to go ahead 3-2. However, the B's could not hold on to the lead and gave up a goal late in the third period to send the game to overtime, where they would ultimately fall to the Devils 4-3.

Both teams came out with a lot of intensity in the first period. That intensity boiled over quickly when Shawn Thornton and Bryce Salvador dropped the gloves and swapped haymakers just 3 minutes into the game. The teams stayed deadlocked until 15:01 of first period when Jamie Langenbrunner put the Devils on the board with a short-handed goal.

Zach Parise put the Devils up 2-0 in the second period when he banked a shot in off of a sprawling Tim Thomas from behind the net.

After a sloppy second period that saw the B's register just 5 shots, the Bruins came out strong in the third period. New Jersey netminder Scott Clemmensen gave his former BC teammate Chuck Kobasew a gift when he misplayed the puck behind the net giving Kobasew an open net. Chuck Kobasew tried to stuff the puck home on a wrap-around but couldn't get the puck inside the the post, however a New Jersey defender would knock the puck in his own goal. The goal was initially washed out on the ice, but was ruled a goal after a short review. Chuck Kobasew was credited with his 9th goal of the season. The B's pulled even with the Devils at 7:11 of the third period thanks to some nifty passing by Phil Kessel and Milan Luic to set up Marc Savard for 18th goal of the season. With 6:30 left in regulation, Marc Savard slid a pass to Dennis Wideman in slot, who beat Clemmensen with a snap shot to put the B's up 3-2. The Bruins looked poised to hang on to the lead until late in the third when Brian Gionta threw the puck in front of the net where it deflected off the skate of Patrik Elias and past Tim Thomas for the equalizer.

In overtime, Jamie Langenbrunner pounced on a rebound and desposited the puck in the back of the net for the game winner and his second goal of night.

-Jamie Langenbrunner's short-handed goal was the fourth shorty that the Bruins have given up this season.

- Jack Edwards doesn't only provide homerism and hyperventilation, but also provides advice of the kids. Edwards had these words of wisdom for today's youth (...and a certain wily veteran center): "Don't put your hand in a snowblower!"

- Patrice Bergeron was only 2 for 13 in the face off circle. Just this week, I praised Bergeron for being the Bruins best face off guy. Way to make me look like a fool Bergy.