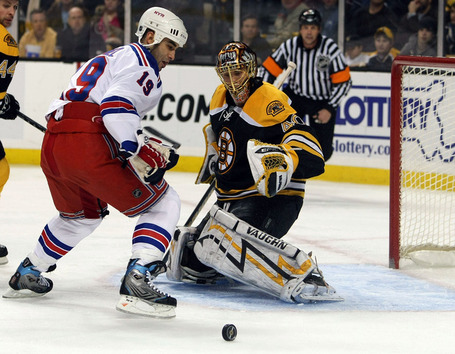 Tuukka Rask stopped all 35 shots he faced to record his first career NHL shutout. Marc Savard scored the game's lone goal at 19:37 of the second period when he deflected a Dennis Wideman slap shot past Henrik Lundqvist. Savard batted the puck out of the air and directed it downward causing the puck to take a strange hop off the ice and into the back of the net.

- Matt Hunwick was scratched from today's lineup. WBZ 1030 AM was reporting that Matt Hunwick missed the game with an undisclosed injury.

- Olympic gymnast and Winchester, MA native Alicia Sacramone dropped the puck for a ceremonial face off before the game.

- Marc Savard extended his points streak to 7 games, while Dennis Wideman has 5 game point streak of his own.