Bruins invite Predators into their home

Share All sharing options for: Bruins invite Predators into their home 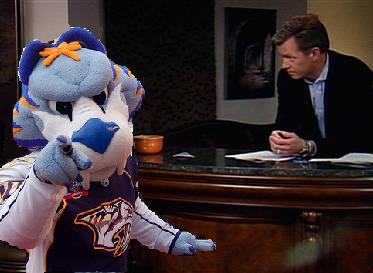 The Bruins will be back on The Garden ice tonight when they play host to the Nashville Predators, finishing up the bad hockey market portion of their schedule.

The Bruins have made several roster moves this week, including trading Chuck Kobasew to the Minnesota Wild, trading picks to the Buffalo Sabres for Daniel Paille, placing Milan Lucic on the LTIR, and calling up Brad Marchand and Vladimir Sobotka. The new look Bruins will try to bounce back from a disappointing 4-1 road loss to the Phoenix Coyotes.

Nashville will try to snap a 5 game losing streak (0-4-1) and earn their first win since October 8th. The Predators will be without the services of leading goal scorer Jason Arnott, who is nursing an injured left shoulder/elbow. Arnott's 3 goals account for one third of Nashville's seemingly non-existant offense.

Shawn Thornton is also questionable with an undisclosed injury. Andrew Ference left practice early on Tuesday after taking a puck to the face.

- Normally, I give you the projected lines but with all the moves the B's have made this week, I have no idea what the lines will look like.

- The Predators have scored just 9 goals in their first 7 games (league worst 1.29 goals per game)

- Johnny Boychuk skated as a forward in practice on Tuesday, but I would expect to see him back on the blue line tonight.

- Former BU standout Colin Wilson has appeared in 4 games for the Preds and will likely see ice time.

During two blowout losses last week to Dallas and Edmonton, it looked like pretty much nothing was working right for the Predators. In recent games, however, the goaltending and defense have tightened up. What remains a problem, however, is goal-scoring, and the loss of Jason Arnott is a tremendous blow. Combine that with awful starts by the two highest-paid Preds, David Legwand (0 points) and Martin Erat (1 goal), and Nashville is hoping to scrape and claw for whatever points they can at the present time.

Dirk from On the Forecheck

- For more insight on the Predators, check out On the Forecheck

I admit his video was not as funny or embarrassing as some of the videos I have posted this season. Don't worry, soon the B's will be back to playing team's with an actual fanbase so I will have more videos to choose from.