Hurricane Warning in effect for The Hub

Share All sharing options for: Hurricane Warning in effect for The Hub 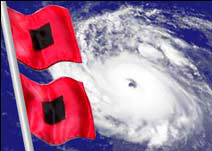 There is a Hurricane warning in effect for Suffolk County. Residents are advised to look out for clowns from the Nutmeg State wearing Whalers jerseys and cowardly men who blame their indiscretions on their wife's illness.

The Carolina Hurricanes will blow into town tonight looking for their first win of the season after falling to the Philadelphia Flyers2-0 last night. Meanwhile the B's will try to turn things around after a disappointing 4-1 loss to the Washington Capitals to open up the season on Thursday night.

Tonight's game will be a homecoming for former B's Aaron Ward, Stephane Yelle, and Andrew Alberts, who were acquired by the Canes in the offseason.

Boston: No Injuries to Report

- I think it is safe to say that Aaron Ward will get a very warm reception from The Garden crowd. He was definitely very well-liked by the fans during his time in Boston.

-Will the B's look for revenge on Scott Walker or is the whole thing squashed now that Aaron ward is wearing a toliet flush on the front of his sweater.

- I am happy to report that Rene Rancourt will be the anthem singer again tonight.

- Massachusetts native Chris Rooney will be work the game alongside Stephane Auger, while Steve Barton and Pierre Champoux will work the lines.

- The Bruins will honor legendary play-by-play announcer Fred Cusick during tonight's game. Cusick passed away last month at the age of 90.

The butt rock sound of Nickelback is the perfect soundtrack to a video chronicling the lives of one of the lamest fan bases in the NHL.