Share All sharing options for: Byron Bitz wishes he was Suri Cruise and other fun facts from the Bruins Media Guide 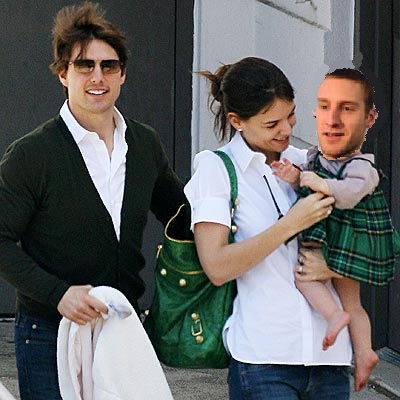 - If Byron Bitz could choose any two celebrities to be his parents, he would choose Tom Cruise and Katie Holmes.

- Andrew Bodnarchuk's biggest fear/phobia is the "the feel of cotton balls".

- Andrew Ference's nickname is "Ferknuckle". I guess this nickname hasn't quite caught on yet. I'll stick with Fragile Ference and Captain Planet.

- Ference chose Oprah and Bono for his celebrity parents. Really? OK, so you would be super rich, but still you would have to spend time with Oprah and Bono. Are there two more overrated celebrities on the planet?

- Jeff LoVecchio appeared in a GMC commercial with Brendan Shanahan when he was in second grade.

- Andrew Bodnarchuk and Brad Marchand grew up together in Hammonds Plains, Nova Scotia.

- Most of the Bruins players were asked what they would bring to a desert island. I think Adam McQuaid might be the only one who would survive. His answer: food, water, and someone else. Marc Savard also had a great answer: a sand wedge, a golf ball, and a flashlight. Trent Whitfield had a similar answer: golf clubs, a 1,000 balls, and bug spray.

- Apparently Kevin Regan really wants to be a back-up goalie. When asked if he could play with any Bruin in history, he chose Andy Moog.

- Vladimir Sobotka's favorite band is Nickelback. I just lost a little bit of respect for Vlady.

- Sobotka also apparently wishes he was an orphan from a third world country. His choice for celebrity parents: Brad Pitt and Angelina Jolie.

- Marco Sturm does not have a very good eye for the ladies (or sense of historical perspective). If he could meet anyone in history, he would choose Steffi Graf.

- One of Tim Thomas' nicknames is "Cheeseburger". This one hasn't caught on yet either. It may stem from his pre-game ritual of eating a cheeseburger the day before a game.

- Blake Wheeler's father James was a pitcher in the Detroit Tigers system.

- Andy Wozniewski claims to have never been bitten by a mosquito.