Share All sharing options for: GM McFly: Wideman or Boyes? 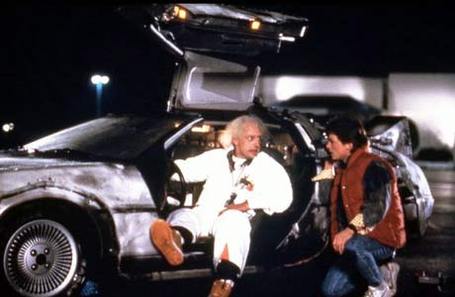 Editor's Note:This is the first of what will hopefully be a reoccurring feature. The concept is simple: I take a look at a trade that the Bruins have made in the past and then I open it up to the readers to decide if they would make that trade again based on what they know now. Today's trade is Brad Boyes for Dennis Wideman.

February 27, 2007: The Boston Bruins trade Brad Boyes to the St. Louis Blues for Dennis Wideman at the deadline.

This is a tricky one because both teams got what they were looking for in the deal. The Blues got a legitimate young goal scorer and the Bruins improved on the blue line.

Boyes, was clearly disappointed about moving to the STD capitol of the U.S. One can only assume that the threat of contracting the clap from one of St. Louie's finest puck bunnies, forced the young sniper to focus on hockey. (Ed. Note: I have no idea how Brad lives his life and I can only assume what a young NHL player's daily life consist of, but I'm sure it is more exciting than being an NHL blogger.) Since being shipped out to St. Louis, Boyes has had back to back 30+ goal seasons (43 in '07-'08 and 33 last year). Boyes is off to a bit of a slow start this season, posting 4-7-11 totals in 18 games. Some critics will point to Boyes' defensive shortcomings (although, I would argue that he his much better defensively than that #81 kid that the B's used to have) and his not-so-impressive +/- (-29 for his career).

Dennis Wideman had a breakthrough year last year, recording 50 points (13-37-50) and a +/- of +32. He established himself as a solid NHL defenseman and justified his big pay check. Wideman was a major factor in the Bruins' (regular season) success last year. This season, Wideman has struggled at times and has made some poor decisions that have led directly to crucial goals against the Bruins. While Wideman has not looked as sharp as he was last year in his own zone, he has also struggled offensively. After averaging 0.63 points per game last season, Wideman has only 4 points (1-3-4) in 17 games this season to go along with a -2 rating.

So, you have two players with very different games. Both guys have had success in the past. Both players are struggling a bit at the moment, but both will likely play better hockey as the season progresses. The question is: Knowing what you know now, would you trade Brad Boyes for Dennis Wideman?

This is a real tough question for me because I realize what Dennis Wideman is capable of, but I also realize how talented Brad Boyes is. At the time of the trade, I absolutely hated it. I thought they gave up on Boyes way too early. Now, I have come around a bit, but I think if I had to do it over again I would keep Boyes. I would love to see what Boyes could do with the current Bruins team around him. Let's be honest, this team could use another goal scorer.

What do you guys think?