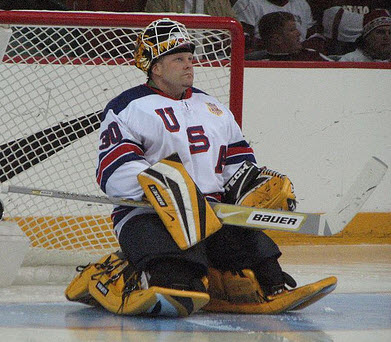 Stanley Cup of Chowder along with the rest of the SB Nation hockey sites, is taking a look at their team's Olympic hopefuls.

Zdeno Chara, Slovakia
Chara is a lock to be on Slovakia's Olympic roster. This will be the second time that the towering defenseman has been on the Slovakian Olympic team, having made the roster in 2006.

Thomas was one of 3 goaltenders to be invited to Team USA's Olympic orientation camp this summer. He will be competing with Buffalo's Ryan Miller and LA's Jonathan Quick. Right now, Ryan Miller looks to be the front-runner for the starting job, but Thomas certainly has a shot to be the #1 netminder for Team U.S. in Vancouver. More than likely both Thomas and Miller will see some ice time during the tournament. This would be Thomas' first Olympic appearance and according to the goalie a life-long dream come true.

Marco Sturm, Germany
Sturm missed Germany's Olympic camp this summer due to his knee injury, but is expected to be on Germany's roster in Vancouver. Sturm has been a part of 2 German Olympic teams (1998 & 2002).

David Krejci, Czech Republic
Krejci is one of 60 hopefuls named to Czech's preliminary roster. The young centerman's Olympic stock has taken a bit of a hit due to his off-season hip surgery, his bout with Swine Flu, and his slow start to the NHL season. However, Krejci's recent improved play and the fact that he is one of a few natural centers among the Czech prospects bodes well for him. This would be Krejci's first Olympic appearance.

Milan Lucic, Canada
Lucic was a bit of a surprise invite to Canada's Olympic orientation camp and is considered to be a long shot to make the team. The Vancouver native would love to be able to showcase his talent on the world's stage in his own hometown, but he will have his work cut out for him to crack Team Canada's roster. Even if Lucic doesn't make the team, inviting him to orientation camp sent a message that Canada is trying to build a real team, not just a collection of All-Stars. This would be Lucic's first Olympic team.

Marc Savard, Canada
Marc Savard was not invited to Canada's orientation camp, a moved seen by many fans as a major snub. Despite not currently being considered to make the roster, Savard still has delusions of being on the ice in Vancouver. I for one, hope he does not make the team and can rest up for the playoff run. Savard has never been named to an Olympic roster.