Share All sharing options for: Bruins grind out 2-1 shootout win over Wild

On a night where the Bruins were out-shot 29-16, Tuukka Rask (28 saves) made some big saves and gave his team a chance to win.

The Bruins got off to an early 1-0 lead 6:50 into the game when Byron Bitz deflected Derek Morris' point shot past Niklas Backstrom off of a face-off win by Marc Savard. The Bruins were out-shot 11-2 in the opening period, but were still able to head to the dressing at the first intermission with a 1-0 lead.

The Wild got a power play goal to knot things up at 1-1 with 9:37 left in the second period when Andrew Ebbett tipped in a wrist shot by Kyle Brodziak from the left dot.

After a scoreless third period and overtime session, the game went to a shootout.

Minnesota 1st Shooter: Koivu beats Rask up high on the stick side. 1-1

Boston 3rd Shooter: Savard comes in wide and his forehand attempt is stopped by Backstrom.

Minnesota 3rd Shooter: Rask gets a piece of Belanger's shot that misses wide.

- Milan Lucic left the game late in the third period after falling awkwardly and twisting his left knee. It looked pretty ugly, but we will have to stay tuned to see how serious the injury is.

- The Bruins need  figure out what they are doing with line changes. This many too many men on the ice calls is inexcusable at this level.

- The Bruins now sit atop the Northeast division after tonight's win.

- The B's are back on the ice on Friday afternoon when the host the New Jersey Devils at TD Garden. 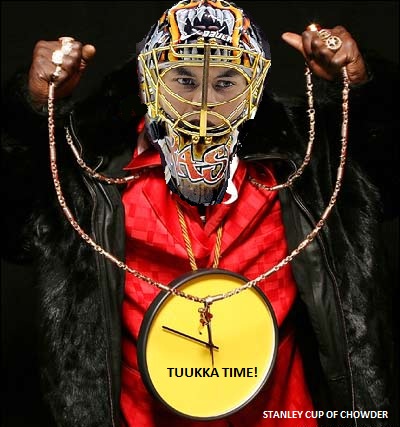