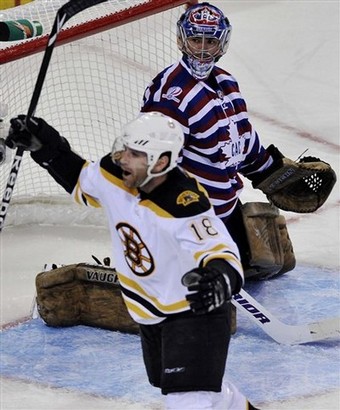 The Bruins were able to hold off the Montreal Canadiens for a 3-1 win this afternoon. With Habs enforcer Georges Laraque still out of the lineup, Montreal called up AHL tough guy Alex Henry. The Hamilton call up was looking to make an impact right away and challenged Shawn Thornton to a scrap on his first shift just 1:06 into the game. With Aaron Ward off for tripping late in the first period, Robert Lang coverted on the power play at 18:18 with the help of a great screen by Andrei Kostitsyn. With a few seconds left in the first period Mike Komisarek tired to clear the puck out of the Montreal zone, but was picked off by Dennis Wideman who threw the puck on net and beat Carey Price with 0.6 seconds left on the clock to tie the game at 1-1. Shawn Thornton would break the 1-1 deadlock at 8:02 of the second period when Byron Bitz set up Thornton from behind the goal for his 5th goal of the season. Marc Savrad would seal the win for the B's with an empty netter from just inside the red line with 57 seconds left in the game.

- The Montreal Canadiens were wearing throwback unifroms from the 1912-1913 season. Jack Edwards described them as "your grandfather's pajamas". Shawn Thornton's take on the the uniforms: "my head was spinning with those things".

- That was an uncalled for dirty hit by Ryan O'Byrne on Chuck Kobasew in the final seconds of the game...but then again, what do you expect from a purse snatcher?

- Matt Hunwick did not make the trip with the Bruins. He stayed in Boston to rest after battling flu-like symptoms the past few days.

- Manny Fernandez is expected to be on the ice  tomorrow in Wilmington for what will probably be an optional skate.