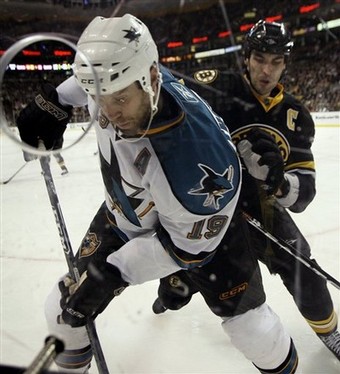 I don't know if a regular season game in February can determine the best team in the league, but the San Jose Sharks were certainly the better team tonight. The Bruins carried a 2-1 lead into the third period thanks to a pair of first period goals by Milan Lucic. The Sharks scored four unanswered goals in the third period including a goal by Joe Thornton that resulted from a Devin Setoguchi pass that bounced off Thornton's skate and across the goal line. Former BU Terrier Mike Grier scored an empty net goal to seal the 5-2 victory for the Sharks.

- The Bruins were completely outplayed in the third period. The Sharks outshot the B's 12-7 in the period and were definitely more physical than the Bruins.

- The B's power play continues to struggle. Despite having 9:11 of power play time compared to San Jose's 1:47, the Bruins couldn't manage to covert on 5 attempts on the power play tonight. The Sharks converted on their lone power play opportunity.

- Petteri Nokelainen left the game in the first period when he took what looked like a high stick to the face. No penalty was called on the play.

- I believe Rob Blake was wearing Morten Andersen's helmet tonight (I made the same lame joke in the open thread but I went with Scott Norwood).

- Versus did interview with BU captain Matt Gilroy during the second intermission. It will interesting to see if Gilroy will get any offers as a free agent this spring.

- The Bruins need to put this loss behind them fast and focus on their 5 game road trip that starts Friday night in New Jersey against a Devils team that has played them tough all year. I almost wish the Bruins played tomorrow night so they didn't have a few days to dwell on tonight's loss.