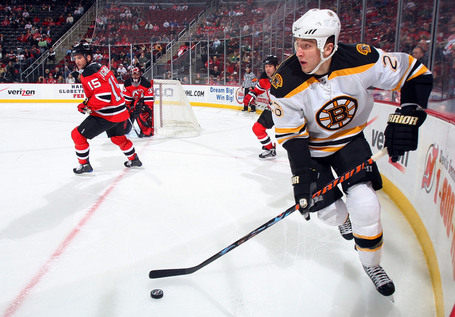 This was the type of game we have come to expect when the defensive-minded Bruins and Devils meet up. The Bruins outshot the Devils 31-18, but couldn't seem to get one past Scott Clemmensen, who recorded his second shutout in as many starts. Bryce Salvador scored the game's lone goal off a face-off at 10:54 of the second period when his soft wrister somehow beat Tim Thomas for what proved to be the game winner for Devils. Tim Thomas had 17 saves in the loss.

- Vladimir Sobotka had a great opportunity to score off of a rebound in front but couldn't gather the puck with his skate and get it to his stick.

- I have noticed that Blake Wheeler has picked up the bad habit of entering the zone alone and trying to skate through 3 defenders instead of slowing up and breaking in as a unit.

- Even though the Axelsson-Bergeron-Karsums line was on the ice for the goal, I thought they played a solid game. Patrice Bergeron put 7 shots on goal and played one of the more physical games I have seen him play this season. Martins Karsums had a few scorings chances, made good decisions with the pucks, and finished his checks.

- The Bruins are on a three game losing streak for the first time since October 23rd.