B's in NC to take on Hurricanes on Glen Wesley Night

Share All sharing options for: B's in NC to take on Hurricanes on Glen Wesley Night 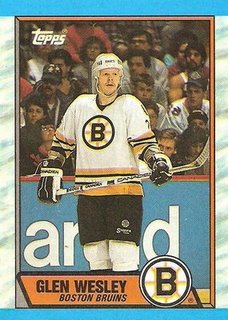 The Bruins will look to end a four game skid (0-2-2) and sweep the season series with the Carolina Hurricanes when they take the ice tonight at the RBC Center in Raleigh, NC. The Hurricanes are currently 3 points behind the Buffalo Sabres for the 8th spot in the Eastern conference. If battling for a playoff spot wasn't enough to get the Canes up for this game, they also have the added incentive of playing Glen Wesley's former team on Glen Wesley Night.

Guy That Like to Drop the Gloves
Tim Gleason: 4 Fighting Majors

- Tim Thomas was the first goalie off and will likely start tonight.

- The Hurricanes will retire Glen Wesley's #2 tonight. Is it me or does every team schedule pre-game ceremonies when the Bruins are in town. So far this year, the Bruins have sat through ceremonies to honor the Canadiens 100th season, Keith Magnuson & Pierre Pilote, Patrick Roy, and Ace Bailey, plus a few opening night ceremonies. It makes sense for the Hurricanes to schedule Glen Wesley's number retirement against his former team though.

- The Hurricanes have called up former Northeastern standout and Milton, MA native Michael Ryan. Ryan is currently the leading scorer for Carolina's AHL affiliate, the Albany River Rats with 25 goals (25-17-42).

- The Bruins will likely try out their new lines tonight.

- It is fitting that Sergei Samsonov found a home in a place where people find watching objects go around in a circle for hours entertaining.

"He’s one of those guys that if you talk about specific qualities, you always have to draw upon the best qualities of every player you played with and see if you can integrate that either into your personality in the locker room or your type of play on the ice, and he’s a guy that he stood in front of everything, he was a man of many hats and he was always a very consistent personality and person," Ward said. "He wasn’t really about himself on the ice, a great assistant captain, a good support guy and a guy who I think we needed in our Cup run who had not won yet.". - Aaron Ward on former Hurricanes teammate Glen Wesley from Matt Kalman's post on The Bruins Blog

- The real reason behind the B's mellow play lately might be their choice of music in the room. According to Bish, the team is enjoying the mellow stylings of Cold Play, U2, and Train.

- For more on the Hurricanes, check out Canes Country.