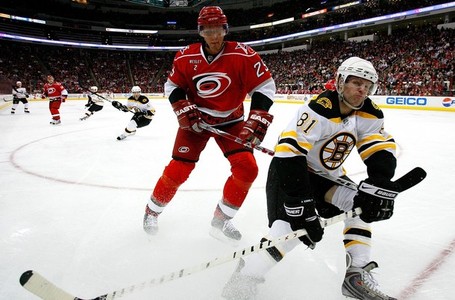 The Bruins snapped their 4 game losing streak to earn their 40th win of the season and the 200th career victory for head coach Claude Julien.

Matt Cullen got the scoring started for the Hurricanes at 11:03 when Ray Whitney fed a pass to Cullen in the slot. The Bruins evened it up at 1-1 courtesy of a powerplay goal by Blake Wheeler off of a rebound in front of the Carolina goal. Shane Hnidy put the B's ahead in the second period with a soft shot that found it's way through traffic after a clean face-off win by David Krejci. Krejci would get a goal of his own at 16:12 of the third period when he broke in alone and beat Cam Ward with a backhander to record a shorthanded goal and give the Bruins a comfortable 3-1 lead. The Bruins struck again a minute later when Chuck Kobasew tipped in a Zdeno Chara blast from the point for a power play tally. Patrice Bergeron added an empty netter to account for the 5-1 final score.

- The Hurricanes retired Glen Wesley's jersey during a pre-game ceremony that lasted roughly 15 minutes longer than planned. The game was scheduled to start around 7:20, but the puck wasn't dropped until 7:36. Former Bruin Derek Sanderson participated in the ceremony, while the Bruins watched from their bench. For some reason Glen Wesley was dressed in full uniform including elbow and shoulder pads. I'm not sure if anyone told him that he wasn't playing tonight. The Canes probably could have used him tonight. At one point, Carolina was down to 4 defensemen after Joe Corvo and Niclas Wallin left the ice to deal with injuries.

- Is Matt Hunwick officially in Claude Julien's dog house? He was a scratch again tonight. I would like to see him back in the lineup soon. The B's had trouble at times moving the puck from their own zone tonight.

- Can Jack Edwards please stop calling David Krejci "The Matrix". I'm not sure who coined this nickname but it is lame.

- The Bruins special teams played well tonight. The power play was 2 for 3 tonight. The were able to move the puck well and they kept things simple. Both PP goals were a result of a shot for the point with traffic in front. The Bruins also killed all 5 Carolina power plays opportunities and had 2 shorthanded goals (including Bergeron's empty netter).

- Did anyone watch the post game show? There was a really awkward exchange between Mike Milbury and Kathryn Tappen. It was something like this:

Kathryn Tappen (in response to Milbury talking about the ice crew at RBC Center wearing helmets): "I feel like I need a helmet some nights sitting next to you."

Mike Milbury: "Maybe a towel when I get excited."

If anyone can find a video clip of this, please let me know.

- The Bruins have now gone 7 games without a fight.

- The team will travel to Florida for this weekend's games against the Panthers and Lightning. The team has the day off from practice tomorrow. A golf outing and fishing trip are planned for tomorrow.