Share All sharing options for: Talkin' Trades: Making a Case for Nik Antropov

As the NHL trade deadline approaches, I will take a closer look at some of the players that could be available. I'm going to start with a player that many have written off and over-looked, Nik Antropov. 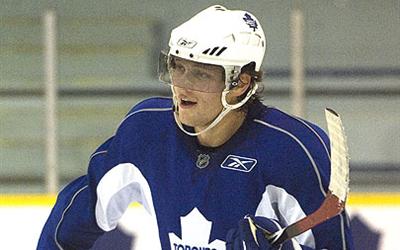 Peter Chiarelli wants the Bruins to get bigger ✓

Winger with a lefthand shot ✓

Nik Antropov has a lot of what the Bruins are looking for and could be acquired without mortaging the future or giving up key elements of the current roster. WEEI's Joe Haggerty predicts that the Bruins could get Antropov for a 2nd or 3rd round pick. Antropov's $2.15 million contract ($2.05 against the cap) expires at the end of the season and Toronto GM Brian Burke has all but said that he is going to let Antropov walk. This seems to have lit a fire under Antropov, who has 7 goals in 11 games since the All-Star break. He clearly wants a change of scenery and a chance to prove Brian Burke and the Leafs organization wrong. Sometimes having a chip on your shoulder and a new zip code can make all the difference in the world. Look at Michael Ryder. Plus, think of all the Borat jokes I could make.

Cons
- Foot speed
- History of injury problems
- Hasn't lived up to his potential as a former 1st round pick
- Doesn't play as physical as you would expect someone his size to play
- "Prone to mental lapses on the ice" - Sportsnet.ca

"Antropov would help any team that thinks that having a 6'6" in front of the net with ridiculous hands and the hand eye coordination of Mr. Miyagi is a good idea. He might not be a 1-3 forward but he'd be great as a 4-6 guy. He's been good for .73 PPG for the past 180 games and finally looks like a guy that understands how to best use his size and strength. The Bruins have a glut of top 6 forwards, but Antropov's impending free agency makes him an ideal fill-in for the spot that the injury to Sturm has created....and don't forget that Bergeron's eggs have been scrambled once or twice so why not cover your butt with a lanky Kazakh"