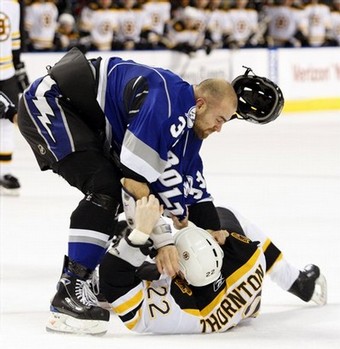 The Bruins outshot the Tampa Bay Lightning 43-18, but the Lightning were able to take advantage of the Bruins' mistakes and an untimely penalty late in the third period to get the win. The Bruins have now lost 2 straight and will close out their 5 game road trip with a record of 1-3-1.

The Bruins jumped out to an early lead just 1:38 into the game when Phil Kessel fired a wrister from the slot that beat Karri Ramo to record his 25th goal of the season and end a 14 game scoring drought. The Bruins' lead did not last very long, as the Lightning came storming back 3 minutes later with 2 goals with the span of 15 seconds (Jeff Halpern & Adam Hall). At 16:42 of the first period, Andrew Ference got his first goal of the season when Marc Savard found him with a cross-ice pass with the B's on the power play. Mark Recchi put the Bolts ahead 3-2 at the midway point of the second period when he redirected a Josef Melichar shot past Manny Fernandez. Zdeno Chara answered back at 15:17 of the second to knot things up at 3-3. With Andrew Ference in the box for delay of game (puck over glass), Vinny Prospal put a wrist shot past Manny Fernandez for what proved to be the game-winner.

- This was not Manny Fernandez's best effort of the season. I thought that he was responsible for the 2nd goal (Adam Hall's wrap-around).

- I'm not a big fan of teams putting their nickname on their jerseys. I blame the Toronto Blue Jays for this trend. Also, what is up with the "Tampa Bay" written across the lower part of the back of their jerseys. Apparently they are stealing fashion trends from teenage girl's sweatpants.

- I think that it is time for Shane Hnidy to spend a couple games as a healthy scratch. I don't see the point of having Matt Hunwick up with the big club just to watch the game from the press box every night.

- Great bout between Mark Stuart and Gary Roberts. Stuart jumped out to an early lead, but the old man hung tough and scored the takedown.