Share All sharing options for: Talkin' Trades: What's the deal with Jordan Leopold? 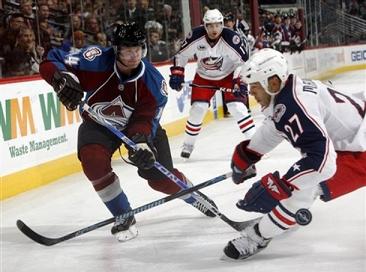 Defenseman who can move the puck ✓

Ever since four Bruins scouts were spotted at an Avalanche game, the rumors have been swirling about trades involving the B's and Avs. Most of those rumors have centered on defenseman Jordan Leopold. The former Hobey Baker Award winner will be an unrestricted free agent this summer and Colorado appears to be one of the few sellers in the West.

Pros
- Puck-moving defenseman
- Good positional awareness
- Has ability to jump up into the play and occasionally contribute offensively
- $1.5 million contract
- Consistant performance (over the past 4 seasons he has averaged between 0.27 and 0.33 points per game)
- The B's have had success with University of Minnesota products