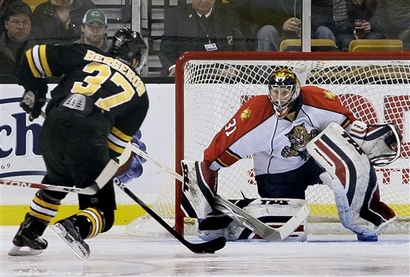 Five different Bruins found the back of the net and 12 different Bruins recorded a point in the B's 6-1 rout of the Florida Panthers. Rookie Byron Bitz scored twice for the B's tonight to record his first multi-point game. Michael Ryder returned to the B's lineup tonight after missing the last 7 games due to a facial injury. Ryder was sporting a large face shield that looked like it was from the Evgeni Malkin line, but the additional face protection didn't seem to hinder his play too much as he finished the game with a power play goal and an assist. Tim Thomas turned aside 24 shots to secure his 26th victory of the season.

Patrice Bergeron got the scoring started for the Bruins just 48 seconds into the game when Florida defenseman Jay Bouwmeester couldn't handle a cross ice pass which allowed Bergeron to break in all alone on Craig Anderson. The B's extended their lead to 2-0 at 6:17 of the first period on a soft backhander in the slot by Mark Stuart that beat Anderson along the ice just out of reach of his left pad. Florida got one back just over 7 minutes later when Kamil Kreps fired a wrister past Thomas. Somewhere on the 9th floor of the Garden Randy Moller was probably screaming "Do you think KFC is still open?" or "I just went from 6 to midnight!".

The second period featured much tighter play than the first. The Bruins were able to get on the board once in the middle frame at 15:53 on a tip-in by Byron Bitz when Stephane Yelle threw the puck towards the goal from along the left wing boards.

The Bruins quickly ended any thoughts of a Florida comeback as they added 3 goals in the third to secure the 6-1 victory. Byron Bitz and Stephane Yelle connected once again at 3:24 when Bitz collected Yelle's rebound and deposited it in the back of the net for his second of the night and and his third of the season. At 5:46, Aaron Ward ripped a slap shot from the point that deflected off a Florida defender and into the net for the 5-1 lead. Michael Ryder added a power play goal with 10:29 remaining in the game when he collected a puck in front of the net and rippled the twine for his 20th goal of the season.

- Good team win tonight. The Bruins got production from all four lines tonight.

- Before tonight's game Peter Chiarelli said the three things that the Bruins needed to do were 1.) drivie hard to the net 2.) claim ownership of the danger zones 3.) finish their checks. I would say that the B's accomplished all three of these things tonight.

- There wasn't a minor penalty called in this game until 9:07 of the third period when Cory Stillman was sent off for hooking.