Share All sharing options for: Talkin' Trades: pondering Tkachuk's return to The Hub 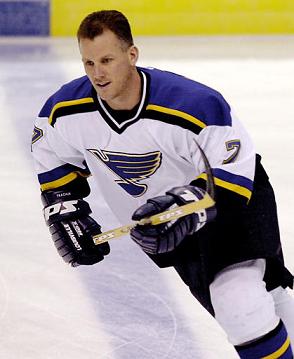 Forward with a left-handed shot ✓

The rumors about Keith Tkachuk getting moved at the deadline have been swirling despite the fact that he has a no trade clause and the Blues are currently only 5 points out of playoff contention in the hotly contested Western Conference. Boston has been one of the most rumored destinations for Keith Tkachuk. If Tkachuk were to waive his NTC you would think that it might be for a chance to win a Cup with his hometown team. Some have speculated that the former BU and Malden Catholic standout wants to return to Boston more than the Bruins want him. Let's not forget that the Bruins and Blues have been trade partners at the deadline before.

Cons
- $4.5 million salary (cap hit of $4 million)
- Not as quick as he once was
- How much gas does he have left in the tank?
- "will take bad penalties from time to time" - The Hockey News
- Can B's fans handle 2 players with last names that start with a silent letter?
- How much young talent would the B's have to give up to rent Tkachuk for the playoff run?

Brad from St. Louis Game Time on the potential of Tkachuk coming to Boston:

Keith Tkachuk, the Melrose, Mass. native, got off to a great start this season. He scored eight goals in the first eight games of the year. He now has 18 on the season. He's still effective on the power play with 11 of his tallies coming on special teams. Taking up space, deflecting shots, screening the goaltender and banging home loose pucks are how Tkachuk has made his living this season.

If you like the plus/minus stat, he's not your guy. And for long stretches of the season he's been played out of position for a large, 36-year-old forward. Due to injuries, Tkachuk has played several games at center, a young-man's position that requires a lot more skating.

The bottom line is Tkachuk has never made the Stanley Cup Final. He's an unrestricted free agent come this summer, but has a no trade clause. A move to Boston would make sense, and I would doubt he would approve a trade to a borderline playoff team. He did that in Atlanta a few season ago and it didn't end well.

Tkachuk calls St. Louis his home, living here in the off season. But he still has strong ties to Boston with family there. He was actually heckled in 2004 for wearing Red Sox gear to World Series games...sitting in his St. Louis Cardinals season ticket seats. Big Walt has said he will retire here and hasn't guaranteed that he will angle for a new contract this summer with any team. So it's hard to predict what he will want to do and what the Blues will do, currently five points out of the playoffs with more than 20 games to play as I write this.