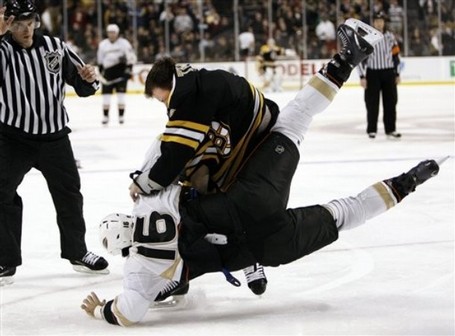 Tim Thomas turned aside 35 shots to earn the shutout and his 100th NHL victory. For the second game in a row, the Bruins hung 6 goals on their opponent. Matt Hunwick, Michael Ryder (2 goals), Chuck Kobasew (2 goals), and Byron Bitz all put the puck in the net for the B's tonight in a 6-0 rout of the Anaheim Ducks that featured plenty of goals and a few fisticuffs.

- Milan Lucic and Marc Savard did not return to the bench for the third period. Milan Lucic appeared to have busted up his hand during his fight with Mike Brown. Claude Julien did not comment on the nature of their injuries after the game.

- NESN had Shawn Thornton mic'd up during the game. He had some pretty interesting and funny things to say including calling someone an "old man" and laughing hysterically when throwing a hit at someone. If anyone has the video of this, please let me know.

- Looking at the team summary, I noticed that Zdeno Chara won a face-off. Did I miss something?

- Bruins have outscored their opponents 12-1 in the past two games.

OK, let's get to the fights:

Thornton was more than willing to drop 'em with former teammate George Parros in response to a questionable hit on Marc Savard. Parros landed more punches, but Thornton scored the takedown. Decision: Draw

I thought Lucic violated "the code" big time by continuing to throw punches after Brown was down on the ice. He might have an argument that Brown also crossed the line with his quasi-sucker punch. Lucic put a pretty good pounding on Brown. Unfortunately, Milan Lucic looked like he busted up his hand in the fight and did not return for the third period. Decision: Lucic...but if Lucic seriously injured his hand, it's not a victory in the grand scheme of things.

Marc Savard dropped the gloves with Scott Niedermayer, but Savy was quickly thrown to the ice by Niedermayer. Both players were served 2 minute minors for roughing. Savard may have been hurt during the alteraction as he did not return to the ice for the rest of the game. Decision: Niedermayer